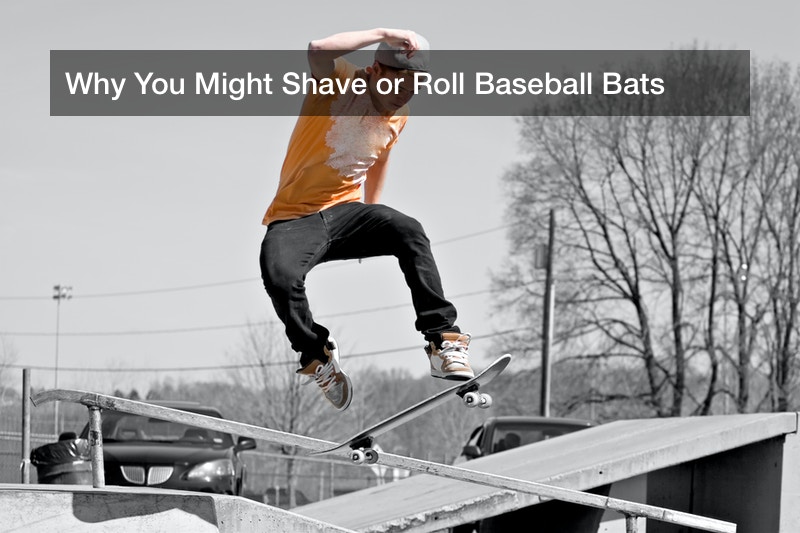 A number of sports make use of specialized equipment for play, ranging from the distinctive racquets of tennis to elongated hockey sticks to the famous wooden and metal bats of baseball. Popular in the United States and abroad, baseball enjoys a wide following and equipment for sale can be found for any level of competition. Students may play on their school’s varsity baseball team, and college and professional baseball make use of higher-end equipment from bats to gloves to the balls themselves. Players usually make use of wooden bats made of ash wood, but many metal bats can be found, too, and may come in a variety of colors and patterns.

Someone new to baseball might not see why anyone would roll their wooden baseball bat through some rollers, but there are indeed reasons to do this. A fresh, wooden baseball bat is not yet operating at peak capacity, and requires some breaking in. During gameplay, and as it strikes balls, a wooden bat will have its fibers bent and broken, making the bat more flexible and thus allowing it to strike a baseball further. This enhances the performance, and broken-in baseball bats are prized. An interested player may speed up this process artificially by stressing a wooden baseball bat in rollers, and rolled baseball bats will quickly offer the same performance as a fully broken-in bat. The rollers will bend and break some fibers in the bat to achieve this. Someone rolling some baseball bats should take care, though, that these bats are not over-rolled or put under too much pressure, or they might simply break altogether.

As noted earlier, rolled bats are easily spotted and are not allowed in sanctioned games, but these bats are a fine choice for casual, non-official games if so desired. What is more, a player may need several top-performance wooden bats on hand, and rolling bats is a much faster alternative to breaking in several wooden bats the natural way. Thus, rolled baseball bats are a fine option for consistent practice. A player may use a naturally broken-in bat for games, and rolled bats for practice sessions without penalty.

Metal bats don’t benefit from getting rolled like wooden ones, but they can be modified by shaving. Instead, someone looking to doctor a metal baseball bat may approach bat shaving services and ask the workers there to remove the bat’s end cap to expose the hollow interior. When this bat is positioned on a lathe table, a grinding machine will be inserted into the baseball bat and shave away some of the padding and material inside. Not a lot will be removed; just a few ounces’ worth. Then the cap may be put back on, and the bat is ready for use.

Shaving material like this makes the metal bat more flexible, and like a rolled bat, it may strike a ball further than a non-modified baseball bat. But here again, shaved bats are not allowed at sanctioned games, so a user may be best off swinging with their shaved metal bats during casual games or a practice session. They will use a regular, non-modified metal bat for official games.